Hi, we’re Charles and Amber Colaw. And we’re here with the win of the week, which is Tim has lost 30 pounds. [inaudible] make sure you watch his testimonial at the end of the video. Charles, give us the fitness tip for the week today.

The fitness tip of the week is the best Keto diet explained. You’ve heard of the Keto diet, the Ketogenic diet, and I’m going to tell you a little bit about it. So Amber is going to ask me some questions and I’m going to kind of give some responses to that. So let’s go ahead.

Okay, so what is a Keto Diet?

Okay, the Keto diet or a ketogenetic diet is basically you are eating foods that force your body to use its own fat as an energy substrate. So your body uses, which that’s actually your fat cell actually drops ketone bodies as an energy substrate when there’s not enough glucose in the blood. So when your body is needing energy and you don’t give it carbohydrates are rate kind of. Most people that know the best keto diets are very low in carbs as a carbohydrates. Carbohydrates give your body energy or glucose quickly.

And when you’re not getting carbohydrates, your body then has to pull energy from some other source. And so it happens. You’re eating foods that are not full of carbohydrates. Your body will then pull from your stored body fat as an energy substrate and you start using your body’s own fat. And so think of each fat cell as like a Ziploc Baggie.

That little Baggie has a strip and that strip is called a loop. And that releases ketone bodies to be used as energy in replacement of glucose. And so your body is then forcing it. You’re eating foods, even they’re eating calories. The foods that you’re eating are basically not a glucose rich, so they’re not carbohydrate rich. And so your body gets into forcing yourself to use its own fat as an energy substrates. Your body’s going to start using your own fat as energy.

And over the course of time you become a smaller, more toned, lean version of yourself. So ketogenic diets are fundamentally lower carbohydrate diets. Sometimes they push up the fats higher because you’re actually eating fat. Fat doesn’t pull you out of Ketosis. And so that’s the one forgiving compound that they joint push more fats. I don’t like as much as some of the Keto diets give a, but your body is basically the goal is to use your own fat or uh, as a ketone body. 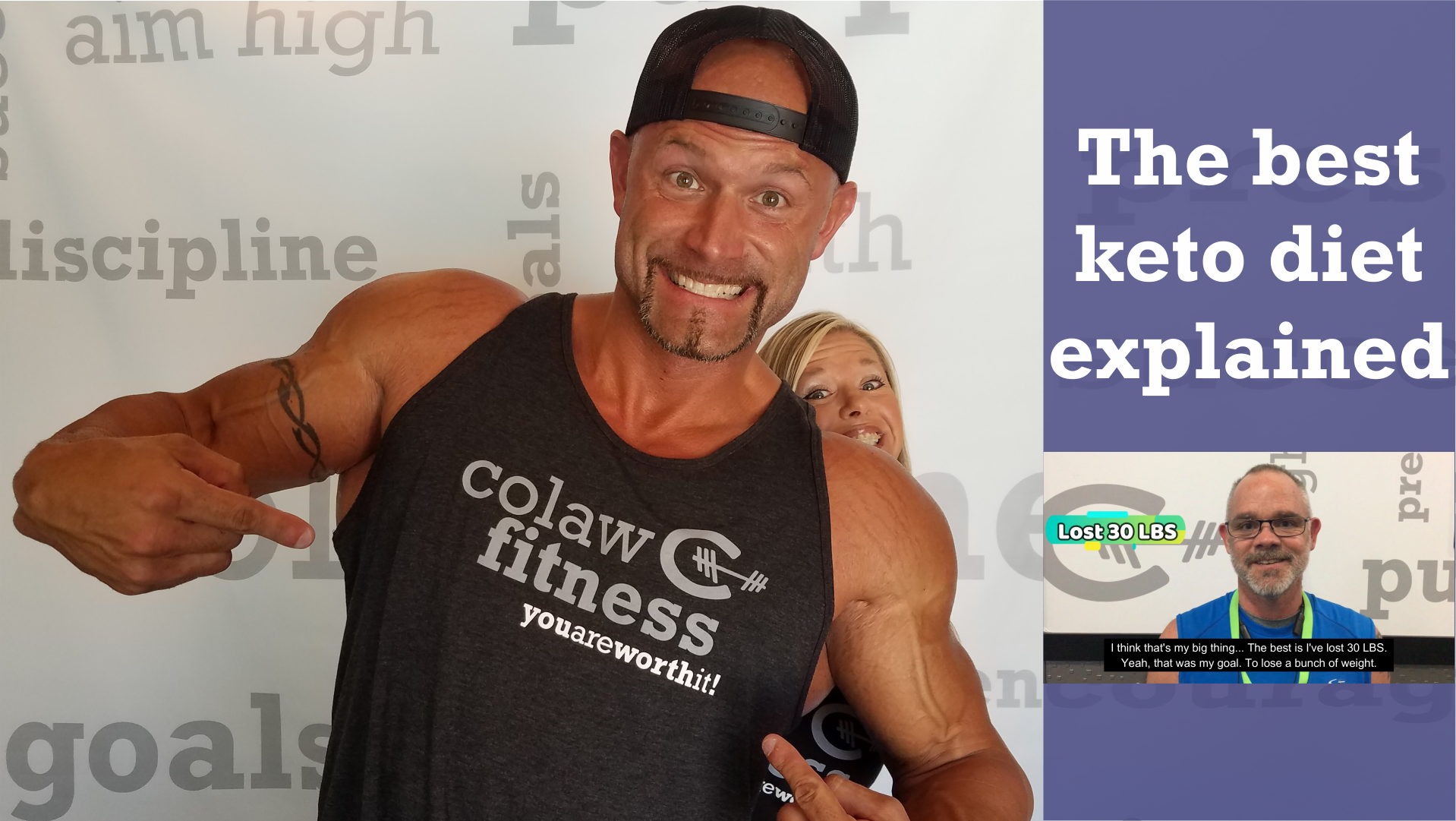 So it is fat cell when Ziploc bag to drop into your bloodstream and ketone body to be utilized as energy to lose your desired body fat.The ketogenic diets are mainly lower carbohydrate diets with a moderate amount of fat to lower fat, but your body is enforcing itself to use its own fat as an energy subject to reduce overall size.

So there’s lots of different keto diets out there. What’s the difference or what’s the best keto diet?

Well, I am a former fitness competitor bodybuilder and I had been teaching ketogenic diets for probably 15 years. So far beyond anybody ever heard of the word keto. I had already been doing it with clients and so it’s really funny how it’s like a 10 to 15 year lag with the stuff I was teaching. Even when I came out of trainer school, they never pushed anything ketogenic. It was very like repulsive.

Now it’s like mainstream so it’s kind of funny how the thing goes full circle and so when I was actually doing with a client that really works 10 or 15 years ago is now a mainstream thing that even doctors or even when I would take trainer classes, they would push against the ketogenic type diet, um, many years ago. So now it’s popular.

The best ones I think are like the ones that I’ve developed in our CF 30 free trainer program and he scrolled through our videos on our Facebook or just tons of clients in, in anything you type in Colaw fitness results or clients are testimonials.

You’ll see tons of people I’ve worked with like probably 5,000 or more clients for fat loss. Those are all fundamentally a ketogenic process of using your own fat as an energy substrate. The best ones are as high as some of the mainstream ones where they show you on Pinterest or all the different social media outlets. They’re very, very high in fat and you don’t really lose as well as you want because you’re eating so much fat. You’re not actually utilizing as much fat off of your body.

So a lot of people overdo the fat category in a ketogenic diet, but the ones that we have are mainly more meat, vegetables, super low to moderate amount of fat and a high protein and those actually will actually help you lose more fat faster. The ones that work best are more of a moderate fat and not a higher fat ketogenic diet.

So do not do the keto diets that are super high in fats. Those actually are pretty slow for fat loss. And if you do more moderate to lower amount of fat, actually try to pull fats out of certain meals out of the day and, and use a little bit to kind of get you ketogenic and then only kind of pulled back the fats because fats are still fueled when your body was still used, the fat you’re eating over the fat on your body.

So, so you know a, the ketogenic diets that work best are the ones that are higher in protein, moderate in fat, and Super Low in carb. So not high fat diet, ketogenic. Those are kind of the, the ones that don’t work quite as well, so, right, right. So let’s go with the quote. Why don’t you give us a quote of the week and then we’ll end with an action step on what they need to do.

The quote of the week is from the Napoleon Hill. He is one of my favorite authors and the design that it did. The quote is desire is the starting point of all achievement. You’ve got to really want to get to have desires, a desire as a starting point of all achievement. Not a hope, not a wish, but a keen pulsating desire which transcends everything you gotta want it so bad you actually do it.

And so I’ll tell clients like you kind of want it, but you don’t want it enough to actually do it. So you’ve got to have a desire, high desire. And the action steps for you guys this week is to sign up for our CF 30 ketogenic diet. Our CF thirty diet is a free diet program that we give at for all clients.

It’s completely free at our gyms and it’s a highly ketogenic diet that targets fat loss and it only has moderate amounts of fat now high amounts of fat with good proteins and have higher fiber rigid vegetables that don’t pull you out of ketosis and really target awesome fat loss with muscle tone. And there’s a little workout that goes along with it. So it’s complete mind freedom to just follow that simple plan.

Right. Okay. My favorite thing of everything you said is the CF 30 diet. It’s free. And we’re going to take all the guesswork out of it for you. It’s all right there. It’s simple, it’s easy to follow and it’s free with your membership. So all of the members go sign up for the CF 30 class.

If you’re not a member, go get signed up today and make sure you sign up for the class because we’re going to give you all the tools you need to get results. And you can be the next person to get results like Tim who lost 30 pounds. Yep. So watch this testimonial. Congratulations Tim. Way To go,

Tim stack clean. Oh, it’s great. Yeah, you’re plenty of energy with, I can come in here at that day and then when I get to work and is like, don’t give me energy kick in the day. So ever since I’ve worked here or I’m out of here, even better in my weight.

Yeah. I think that’s my big thing. So I’ve lost 30 some pounds. Yeah, I was, my goal was to lose a hundred weight, and I and I have done that and I’ve hit my goal and I’ve stayed at my goal for six months now. Yeah.
[inaudible].